To me, each novel is first about the character, then the plot. So The Book of Fate began with my own sense of frustration from feeling like I was about to rewrite a character I’d already written many times before. That’s what terrifies me most as a writer – being one of those novelists who just starts churning it out. At the same time, my father was diagnosed with cancer – and in the surgery that saved his life, he received an unavoidable scar that now marks his entire forehead. That’s when the light bulb blinked. I just remember thinking: instead of writing yet another thriller with yet another young perfect hero, what if I took that hero, shattered and broke him in chapter one, and then tried to see if that shattered character could do the same things that his former self did so easily? I wasn’t sure of the answer, so that’s what excited me as a writer. At the same time, I received a letter from former President Bush saying that he liked one of the novels. It’s a fun letter to get. And it put me on my current obsession with studying former presidents. The loss of power is fascinating. So maybe in the end, it was all just fate.

The one sentence on the back of the book will probably say something sexy like: Wes Holloway is a young Presidential aide who helplessly watches as fellow aide Ron Boyle is killed in an assassination attempt—but eight years later, Wes learns that his so-called friend Boyle is actually alive. I’m sure there’ll be lots of exclamation points in there—and words like gripping and stunning and brilliant. And for sure they’ll mention the decade-old Presidential crossword puzzle and the two-hundred year old code created by Thomas Jefferson. But I think The Book of Fate is actually about the loss of power and the struggles we all have when we think we haven’t reached our personal potential. Wes, the President, Lisbeth, Rogo, Dreidel, the Three, even Nico – all of them have fallen short from what they’d planned. And The Book of Fate grapples with each of their personal theories for why that’s happened: that it’s an accident, that it’s someone else’s fault, that it’s the circumstances of the moment, that it’s their own fault, and of course—the one all of us in America love to reach for—that it’s fate. All books are a reflection of the time they’re written in. And The Book of Fate is, to me, a reflection of our current world: a world where we all search for heroes—and especially after 9/11—where we realize that the super-perfect-idealized hero doesn’t really exist anymore. In WWII, we were a country of supermen. Now we’re a country of spider-men: people who want to save the day and do it all perfectly, even though we realize we’re all a bit scared and terrified like teenagers inside.

It came from a simple letter I got in the mail from former President Bush. He wrote to say he liked one of the novels—and then put up with me when I asked if I could come out there to see what life was like. As for former President Clinton, I’d met him when The Tenth Justice was published, so was happy when he signed off on me visiting his staff in Harlem. As for what the visits gave me, it gave me every one of the true details in the book that makes you think “that’s exactly how it is.” Because that’s exactly how it is (though the book is all fiction!). My favorite was former Presidents being required to plan their own funerals right when they leave office (what a nice way to say thanks).

How absolute the loss of power is. Clinton said it best—when you leave office, “you lose your power but not your influence.” But man, you lose your power. For me, though, the one thing that amazed me was how little we actually use our former presidents. Only recently—with the tsunami and Katrina relief—have we called upon these great men for service. They ran the entire country—and yes, they’ve earned the rest if they want it—but for the most part, we send them on their way and treat them like second cousins, only calling them on anniversaries and birthdays. As for what else I learned, my favorite details are in the book: from how some presidents race to get their morning briefings as their last tie to power, to how others miss the spotlight so much, they travel abroad because that’s when they get briefed by the CIA. It’s a subculture shared by four men. Current Bush will soon make it five. It’s the greatest most elite club in the world.

I hope Wes is the homonym to my other characters: he sounds and is spelled the same, but he has an entirely different meaning. Of all my characters, I think I feel the most for Wes—especially because of his link to my own father. And let’s be honest, every one of my books is really about my father.

It’s odd—when The Tenth Justice came out, I never thought of myself as a legal thriller writer. But the publishers and press liked that box, and they thought it would sell books, and I was 27 years old, so I was more than happy to go along with it. But the books I’ve written have always been designed to transport readers into a world they couldn’t go otherwise, from the Supreme Court, to the White House, to the Capitol, to prestigious private banks, to the world of former presidents and secrets about our founding fathers and the Masons. The books are always steeped in historical research, not law—and I’ve proudly never written a true courtroom scene. I was a history major and I’ll always be a history major. So to me, I’m doing what I always do—simply writing about worlds that fascinate me. 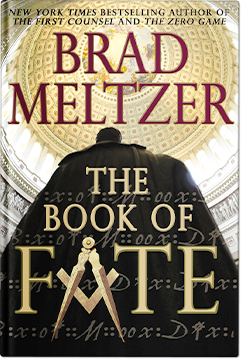