In 1898, John Elbert Wilkie, a friend of Harry Houdini, was put in charge of the United States Secret Service. Wilkie was a fan of Houdini and did his own tricks himself.

It is the only time in history that a magician was in control of the Secret Service.

The Escape Artist opens with Nola Brown. Nola is dead. The government says she’s dead. And her body is brought to Zig, who helps put to rest the bodies of those who die on the government’s top-secret missions. Zig knows Nola since she was little. She was friends with his daughter and remembers a campfire accident where Nola lost the top part of her ear. But as Zig examines this body, he sees that her ear is intact. Confused, he runs fingerprints. This isn’t Nola. And as he opens up the body, he finds a note inside: "Nola, you were right. Keep running."

And that’s Chapter 1. Zig knows the real Nola is alive. And out there. He needs to find out who’s after her and what happens.

And also, when people see who Nola really is…and what her character is… You got blurbs galore. Harlan Coben says, "Not since The Girl with the Dragon Tattoo have you seen a character like this." Lisa Scottoline says the same. Michael Connelly. David Baldacci. Brad Thor. It’s a murderer’s row of gushing. And they’re right. Nola definitely makes you feel you’re seeing someone new. Like Lisbeth in Dragon Tattoo.

And I appreciate your boasting. But that isn’t fair to The Girl With the Dragon Tattoo. But in my head, Nola is Nola. There’s no one like her.

We were filming the very first episode of our TV show, Lost History and were in the HQ of one of the most obscure jobs in the Army: The Artist in Residence. Since World War I, the Army has assigned one person - an actual artist - who they send out in the field to...paint what couldn’t otherwise be seen. It’s one of the greatest traditions in our military - they call them war artists. They go, they see, and paint, and catalogue victories and mistakes, from the dead on D-Day, to the injured at Mogadishu, to the sandbag pilers who were at Hurricane Katrina. In fact, when 9/11 occurred, the Artist in Residence was the only artist let inside the security perimeter. From there, Nola came to life in my head. Imagine an artist/soldier whose real skill was finding the weakness in anything. The Escape Artist started right there.

Years ago, I went to the Middle East with the USO, then a few months back, I took another trip to entertain our troops. Dover Air Force Base is a place I never thought the government would let me into. The Dover scenes in the book are all based in reality: Dover is home of the mortuary for the US government’s most top-secret and high-profile cases. On 9/11, the victims of the Pentagon attack were brought there. So were the victims of the attack on the USS Cole, the astronauts from the space shuttle Columbia, and the remains of well over fifty thousand soldiers and CIA operatives who fought in Vietnam, Afghanistan, Iraq, and every secret location in between. In Delaware of all places, at Dover Air Force Base, is America’s most important funeral home.

In their building, as you see in the book, they make sure our most honorable soldiers are shown the dignity and respect they deserve. In addition, the people there know details about hidden missions that almost no one in the world will ever hear about. Dover is a place full of mysteries…and surprises…and more secrets than you can imagine. As someone who writes thrillers, it was the perfect setting for a mystery.  Plus, in today’s world, we need real heroes. The people here are the real deal.

They are all real people. And what it says in the book, about what they secretly did for Houdini, that’s real too. As for the rest, it’s so amazing, right? I’m not ruining it here.

Sometimes an author needs to keep his own secrets. :)

I believe the most authentic story you will ever tell is your own story. And in every single book, that’s all I’ve been doing: telling my own story. Over time, I’ve realized that: 1) my life takes on new hardships and 2) I’m more honest with myself and my readers. So yes, Nola and Zig - and the broken parts of their souls - are a reflection of my own worst moments and fears. Fortunately, their lives are far more devastating than mine. But their paths out of loneliness and sorrow are exactly the same: It’s the story at the center of every life. We all need to love and be loved. It’s the only way Zig and Nola will ever pull off the hardest magic trick of all: coming back to life after a tragedy.

We do the I am Gandhi graphic novel in May. My new Superman story with artist John Cassaday also comes out in May for Action Comics #1000. Then I am Neil Armstrong comes out in September. And as for the new thriller, I can’t shake Zig and Nola. They talk to me every day. So yes, you’ll see them again soon. 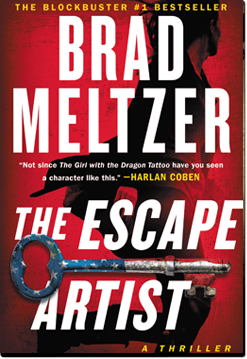