Everyone knew why. Shifting in the packed pews, over two hundred mourners tried to be nonchalant, but they still kept glancing toward the back of the church.

They weren’t looking for the coffin. Dr. Stewart Palmiotti’s dark wood coffin had already been rolled to the front of the church, by the pulpit. They weren’t looking for Palmiotti’s family. His ex-wife, who had caused so much heartache, and his girlfriend Lydia, who had given him so much happiness, were both in the front row, on opposite sides. Relatives, friends, and coworkers filled in the rest. Typical funeral.

Here’s what wasn’t typical: Each mourner was forced to walk through a metal detector before they were allowed inside.

This was Washington, D.C. Everyone knew what that meant. He was coming. The only he that mattered. The President of the United States. Naturally, the Secret Service waited until everyone was in their seats. Then, with no warning at all, the back doors closed, then popped open.

“Your speech, sir,” one of his aides whispered, handing him a binder with the eulogy.

Gripping the binder and annoyed that the aide had been seen by the mourners, the President stepped forward as every head turned his way. Usually, when he entered a room, they’d play “Hail to the Chief.” Today the room was silent.

Clenching his jaw and keeping his famous gray eyes staring straight ahead, President Orson Wallace walked alone down the main aisle, as if he were in a wedding of one.

He was used to being stared at. That was part of the job. But as he headed farther down the aisle, even the most powerful man in the world wasn’t ready for the sudden breathlessness that overtook him. The reality of the moment pressed against his chest. This was the funeral of his best friend.

It’s one thing to be stared at by strangers. This was a roomful of family and friends, people who used to call the President by his first name.

Growing up in Ohio, Palmiotti and Wallace went from grade school, to high school, to college at the University of Michigan, always together. When Wallace was elected governor, Palmiotti followed. They were together on that night they never talked about anymore. And when Wallace won the White House, someone mentioned that when George H. W. Bush was elected President, he appointed a dear friend as White House doctor, understanding that sometimes the best medicine was simply having someone to talk to. Especially someone who knew you well. And knew your secrets.

The President liked that. On the day of Wallace’s Inauguration, Dr. Stewart Palmiotti was made head of the White House Medical Unit, with an office adjacent to the West Wing.

“All those things you did for him . . . You know he loved you,” Palmiotti’s girlfriend Lydia whispered as the President finally reached the front row. Her voice ... her body ... everything was shaking as she stood from her seat and embraced Wallace.

Returning her hug, but staying silent, the President slowly made his way to far end of the front row, pretending he didn’t see their twelfth-grade history teacher in the crowd.

But the President’s real pain didn’t come from spotting old friends. It came from the certain knowledge that he was responsible for all this.

It was Beecher who had learned what the President and Palmiotti had done on the worst night of their lives, back in college, twenty-six years ago. It was Beecher who found out that they had buried a baseball bat and car keys into the face of a man from their hometown. And that Palmiotti and the future President, along with Wallace’s sister, had shattered the man’s eye socket, punctured his face, and driven bits of his skull into his brain, causing irreversible brain damage.

Worst of all, it was Beecher—and the group he worked with— who would never let it go…never stop searching…not until they could actually prove what happened that night years ago.

Beecher and his so-called Culper Ring.

They were the ones who could do the real damage—the ones who knew Wallace and Palmiotti’s secret. Yet that wasn’t the only secret the President was keeping.

Taking his seat at the end of the far end of the aisle, the President of the United States eyed his best friend’s coffin.

Almost on cue, his phone vibrated in his pocket. Looking down, President Wallace pulled it out just enough to read the newest text onscreen: 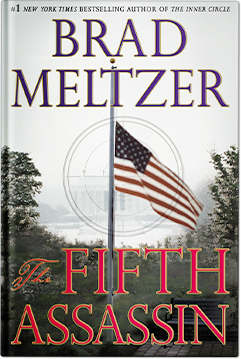