“See the hidden tunnel below the White House.”

“Deliciously hard-boiled prose…pedal-to-the-metal pacing all the way to the climax.”

“A book for which the phrase ‘page turner’ was meant.” 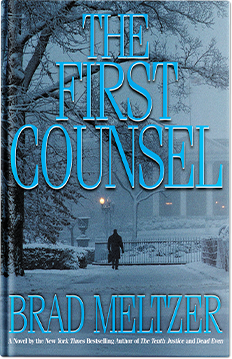 Shadow is the Secret Service code name for First Daughter Nora Hartson. And when Michael Garrick, a young White House lawyer, begins dating the irresistible Nora, he’s instantly spellbound, just like everyone else in her world.

It’s a world all of us have heard about but few of us really know. A world where power is an aphrodisiac, your father is the President, your close friends wear earpieces and carry guns, and everyone watches your every move.

Like most, Michael thinks he can handle the pressure. Until, while together late one night, he and Nora witness something they were never meant to see—and become ensnared in a secret agenda, a scheme by a White House insider that includes betrayal and murder.

Suddenly, this young Washington power broker, who just yesterday was out on a dream date, finds himself trusting no one, not even Nora, in a battle to prove his innocence. It’s a battle that will shake the walls of the Oval Office to their foundations—and may ultimately cost Michael Garrick his life.

In a fresh and knowing voice, Meltzer takes us down the rabbit hole of 1600 Pennsylvania Avenue and paints a riveting picture of a danger only one man will know—what it’s like to fall in love with the world’s most powerful daughter.