No—I was thinking of all of them. Sadly, you don’t get to be President by being Father of the Year.

It really wasn’t a decision. I just try to write the best book I can. When I researched this one, I thought, “Hey, this White House place is pretty keen.” That was it. As for genres, that just seems silly. Genres can be great, but they’re also a trap. Don’t write for genres. Write for yourself.

Ah, The West Wing. First, it’s a brilliant show, and yes, I love the writing. Second, I’d be a liar if I said it didn’t make me nuts. Why? Here’s the history: The week I started researching The First Counsel was the same week the Monica Lewinsky scandal broke. The Washington Post then wrote this big story about how the Washington thriller was dead, and how no one could compete with reality. And there I was, thinking, “Oh, God—I’m about to start a Washington thriller. How can it be dead?”

Little did I know that two years later, The West Wing would be one of the best shows on television. Of course, by the time it aired, I was already in the editing stage. Then I watched the first show. They deal with the census. In The First Counsel, the opening meeting talks about the census. Their President’s name is Bartlet. In The First Counsel, the politician running against the President is named Bartlett. I almost ate my remote right there. Obviously, it was just a coincidence (the census is always a good, solid, play-at-any-time issue), but it was still nuts. As for Bartlet, that was just freaky weird. Yes, I could’ve changed it—there was time—but that was the name I picked and I wasn’t changing it for anyone. Now, in the book, it just seems like a inside joke. 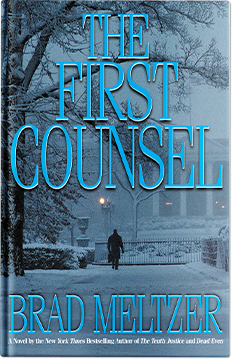