Jack Nash decides, at midnight on a Wednesday in the dead of summer in Los Angeles, that his daughter Hazel is ready for The Story.

He was six years old when his father first told him The Story. That’s Hazel’s age now—exactly six—and she’s wide awake, forever asking why and what: Why does she need to go to sleep? What are dreams? Why do people die? What happens after people die?

“You’ll know when it happens,” Jack tells her.

Five years old was too young. Five is how old his son Skip was when Jack told him The Story and it hadn’t stuck, didn’t seem to make any impression whatsoever. Which got Jack wondering: How old do you have to be to retain an event for the rest of your life? That was the thing about memory: After a certain point, you just knew something. How you came to know it didn’t matter.

Hazel sits up on an elbow. “I won’t be scared,” she says solemnly. Jack knows it’s true: Nothing scares Hazel. Not when she can learn something. She’s the kind of child who would burn her right thumb on a hot stove, then come back the next day and burn her left in order to compare.

In an odd way, it made Jack proud. Hazel’s brother Skip wouldn’t touch the stove in the first place, always so cautious of everything. But Hazel was willing to give up a little skin for adventure.

“It begins with a mystery, a riddle,” Jack says, and he can hear his father’s voice, his father’s words, so clearly. Dad’s been gone five years now, but the memory of his last days is so vivid, it could have been thirty minutes ago. “If you figure the riddle out, you can stay up all night. If you can’t, you need to go to sleep. Deal?”

“Close your eyes while I tell it to you,” Jack says, slipping into The Voice, the same one his own dad used to use, the one Jack now uses on his TV show, where every week he explores the world’s most famous conspiracies: Who killed JFK? Why did FDR have a secret fraternity known as The Room? Or his favorite during sweeps: Outside of every Freemason meeting, there’s a chair known as the Tyler’s Chair; what are its true origins and secrets?

It’s a show Hazel isn’t allowed to watch. Jack’s wife Claire worries the show will give Hazel bad dreams. But Jack knows that Hazel revels in nightmares, just like Jack used to: Something chasing you in your sleep was always far more interesting than fields of cotton candy. “This story begins a hundred and fifty years ago, with a farmer,” Jack says as Hazel leans farther forward on her elbow. “The farmer woke up early one morning to tend his fields, and a few yards from his house, he found a young man on the ground, frozen to death.”

Hazel was fascinated by freezing—Jack and Claire constantly found random objects in the freezer, everything from dolls to plants to dead spiders.

“The farmer takes the body inside his farmhouse, puts a blanket on him to thaw him out, then goes and rouses the town doctor, bringing him back to look at the poor chap.

“When the doctor gets the dead man back to his office, he begins a basic autopsy. He’s trying to find some identifying details to report to the mayor’s office. But as he cuts open the man’s chest, he makes a surprising discovery . . .” And here, Jack does the same thing his own father did, and gives Hazel two brisk taps on the center of her breastbone, gives her a real sense of the space involved. “Right there, on the sternum and on the outside of his rib cage, he finds a small object the size of a deck of cards. It’s encased in sealing wax. And as he cracks the wax open, he finds a miniature book.”

“Would it even fit there?”

Jack stops and watches Hazel. Her eyes have remained closed the entire time, but she keeps furrowing her brow, thinking hard. “So?” he says. “How did it get there?”

Don’t they teach anything in school anymore?

“He was a soldier,” Jack says. “During the Revolutionary War.”

“Was the bible put in the man’s body after he died?”

“There would have already been a wound on his chest.”

“I don’t know,” Jack says, thinking, Well, that’s not a question I’d ever pondered. Hazel’s eyes flutter open, then close again tightly. She’s checking to see if he’s lying. Hazel stays quiet for thirty seconds, forty-five, a minute. Then, “Why does it matter how it got there?”

“Because it’s a mystery,” Jack says. “And mysteries need to be solved.”

Hazel considers this. “Do you know the answer?”

“How many guesses do I get?”

She nods once, an agreement sealed. “Okay,” she says, “lemme think.”

Jack stays with her another ten minutes, then heads to his own bedroom, where Claire is up, reading. “Did you get her to sleep?” Claire asks.

Hazel waits until she can hear her father and mother talking down the hall before she opens her eyes.

She gets up, walks across her room, opens the closet where she keeps her stuffed animals. The fact is, she doesn’t really care for stuffed animals, thinks they’re kind of creepy when you examine them closely: animals with smiles and fake shines in their eyes, no teeth, no real claws either. She quickly finds Paddington Bear, undresses him from his odd blue rain slicker, fishes out a pair of scissors from her desk, and then, very calmly, cuts open Paddington’s chest.

Inside is nothing but fuzz, white and clumpy. It’s nothing like how she imagines a body will be, but that doesn’t matter. She pulls out all of the stuffing, leaves it in an orderly bunch on her bedroom floor, and then fills Paddington’s empty cavity with a Choose Your Own Adventure paperback, the one where you pretended to be a spy, but where you mostly ended up getting run over by trucks. She then packs the bear back up with stuffing, staples his fur back together, makes Paddington look smooth and new and lovable, then puts his jacket back on. Adjusts his red cap.

Hazel then tiptoes out to the kitchen, finds the stepladder, and slides it in front of the freezer. As she climbs up and examines the few packages of frozen food, she decides Paddington would be best served back behind the old flank steak that’s been in the icebox for nine months now.

When her father asks her how the hell Paddington Bear ended up in the freezer, disemboweled and filled with a book, she’ll give him her answer. It’s impossible, she’ll say.

Nothing is impossible, her father will say, because he is a man of belief. Then it must have been magic, she’ll say.

Then it must have been a person, trying to fool you, she’ll say. And she will be right. 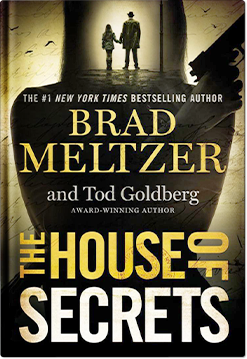