In 1989, during his final minutes in the White House, outgoing President Ronald Reagan scribbled a secret note..and, it was reported, a picture of a turkey. The note said, “Don’t let the turkeys get you down.” He then slipped the note into the Oval Office desk and left it for his successor, President George H.W. Bush.

In 1993, President Bush left a private note in the desk for Bill Clinton, who left a note for George W. Bush, who left one for Barack Obama. But there were two things no one knew.

The tradition didn’t start with Ronald Reagan. It started with George Washington.

And the picture Reagan drew? It most definitely was not a turkey.

He knew the room was designed to hold secrets.

The briefcase from Watergate was opened in a room like this. Same with the first reports from 9/11.

He knew that this room..sometimes called The Box or The Tank..held Presidential secrets, national secrets, and pine-box secrets, as in, the kinds of secrets that came with coffins.

But as he stood in the back corner of the small, plain beige room, swaying in place and flicking the tip of his tongue against the back of his front teeth, the archivist with the scratched, black reading glasses knew that the most vital thing in the room wasn’t a classified file or a top-secret sheet of paper..it was the polished, rosy-cheeked man who sat alone at the single long table in the center of the room.

He knew not to talk to the rosy-cheeked man.

He knew not to bother him.

All he had to do was stand there and watch. Like a babysitter.

It was absurd, really.

But that was the job.

For nearly an hour now.

Babysitting the most powerful man in the world: the President of the United States.

Yet for all the secrets that had been in this room, the archivist with the scratched, black-framed reading glasses had no idea what he’d soon be asked to hide.

With a silent breath through his nose, the archivist stared at the back of the President, then glanced over at the blond Secret Service agent on his far right.

The visits here had been going on since President Orson Wallace was first elected. Clinton liked to jog. George W. Bush watched baseball games in the White House Residence. Obama played basketball. All Presidents find their own way to relax. More bookish than most, President Orson Wallace travelled the few blocks from the White House and came to the National Archives to, of all things, read.

He’d been doing it for months now. Sometimes he even brought his eight yearold son. Sure, he could have every document delivered right to the Oval Office, but as every President knew, there was something about getting out of the house. And so, the “reading visits” began. He started with letters that George Washington wrote to Benedict Arnold, moved to classified JFK memos, and on to today’s current objects of fascination: Abraham Lincoln’s handwritten Civil War notes. Back then, if there was a capital case during a court-martial, the vote of “life or death” would come straight to Lincoln’s desk.

The President would personally decide. So in the chaos of President Wallace’s current life, there was apparently something reassuring about seeing the odd curves and shaky swirls in Lincoln’s own handwriting.

And that, as Wallace scribbled a few personal notes on his legal pad, was a hell of a lot more calming than playing basketball.

President Wallace nodded slightly, beginning to pack up, but never turning around. “Is Ronnie joining us or no?”

At that, the archivist with the scratched reading glasses stood up straight. His supervisor, Ronald Cobb, was one of President Wallace’s oldest friends from law school. It was Cobb who usually managed the visits and selected which treasured files the President would read. But with his recent diagnosis of pancreatic cancer, Cobb wasn’t going anywhere for a bit.

“Mr. Cobb’s at a chemo appointment, sir,” the archivist explained in a voice that seemed strained even to himself.

It was the quick motion of the legal pad that caught the archivist’s eye. For a moment, as the pale yellow pages fanned forward, he could swear one of the brown, mottled Lincoln letters was tucked inside.

The archivist squinted, trying to see. But from the angle he was at, diagonally behind the left shoulder of the President, the Lincoln document was..

This was the President of the United States. He’d never…

No, the archivist told himself.

“Before we go, I just need to hit the little vice president’s room,” President Wallace said, using the joke that always got him easy laughs with donors. He stood from his seat and held his legal pad at his side.

According to current research, when faced with an awkward social situation, the average person will wait seventeen seconds before breaking the silence.

“Mr. President,” the archivist called out without even hesitating. “I’m sorry but..”

President Wallace turned slowly, showing off his calming gray eyes and flashing the warm, fatherly grin that had won him the governorship of Ohio as well as the White House. “Son, I just need to run to the restroom, and then we can..”

The room was no bigger than a classroom. Before the archivist knew it, he was standing in front of Wallace, blocking the President’s path to the door. The blond agent stepped forward. Wallace motioned him back.

“Tell me the crisis, son,” the President asked, his grin still keeping everything calm.

“I just…urr…” The archivist stammered, slowly starting to sway. “I’m sure it was just an honest mistake, sir, but I think you may’ve accidentally…huhh… In your notepad.” The archivist took a deep breath. “One of the Lincoln letters.”

The President laughed and went to step around the archivist.

The archivist laughed back.

And stepped directly in front of the President. Again.

President Wallace’s gray eyes slowly shrank into two black slits. He was far too savvy to lose his temper with a stranger, but that didn’t mean it was easy to keep that grin on his face. “Victor, I need you to excuse us a moment.”

“Victor…” the President said. That’s all it took.

With a click and a loud metal crunk, the metal door to The Vault opened and Victor joined the other three agents stationed in the corridor outside.

Staring at the archivist, the President squeezed his fist around the legal pad. “Son, I want you to be very careful about what your next words are.”

The archivist craned his neck back, taking in the full height of the President, who was so close the archivist could see the golden eagle and the Presidential seal on Wallace’s cufflinks. We have a set of LBJ’s cufflinks in our collection, the archivist reminded himself for no reason whatsoever. And as he looked up at the most powerful man on the planet..as he studied the leader of the free world..it took far less than seventeen seconds to give his answer.

“I’m sorry, Mr. President. But those Lincoln documents aren’t yours.” For a moment, the President didn’t move. Didn’t blink. Like he was frozen in time.

There was a deep thunk from behind the archivist. The metal door to the room clicked open.

“I toldja, right, Mr. President?” a familiar Midwestern voice called out as the door clanged into the wall. The archivist turned just in time to see his boss, Ronnie Cobb, hobble inside, faster than usual. “I told you he’d come through. No reason to bother with Beecher.”

The President smiled..a real smile..at his old friend and put a hand on the archivist’s shoulder. “Good for you,” he announced.

“I-I don’t understand,” the archivist said, still focused on Cobb. “I thought your chemo…” He looked at Cobb, then the President, then back to Cobb, who was beaming like a new father. “What the heck’s going on?”

“Didn’t you ever see Willy Wonka?” Cobb asked as he limped a few steps closer. “The big prize goes to the one who tells the truth.”

The archivist paused a moment, looking at the two men. “What’re you talking about? Why’d you mention Beecher?”

“Relax..we’ve got something a lot better than a spooky chocolate factory,” President Orson Wallace said as he closed the door to The Vault, once again keeping his Secret Service agents outside. “Welcome to The Culper Ring.” 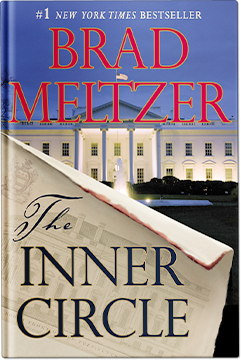