Go into the secret tunnels below Disney World.

“Meltzer is so good.”

“A fast-paced thriller…With a playful sense of humor…A classic chase.”

“A giddy thriller…banking, cyber-theft, and Disney World in a fast-paced tale of financial adventure.”

“Meltzer has mastered the art of baiting and hooking readers quickly into a fast-moving plot.” 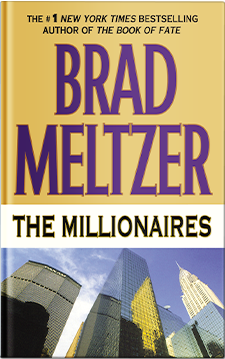 What would you steal if you couldn’t get caught? Find out what Brad Meltzer’s characters do in The Millionaires.

It started as the perfect crime. Then it took a turn for the worse.

Charlie and Oliver Caruso are brothers who work at Greene & Greene, a private bank so exclusive you need two million dollars just to be a client. But when the door of success slams in their faces, they’re faced with an offer they can’t refuse: three million dollars in an abandoned account. No one knows it exists, and even better, it doesn’t belong to anyone.

It’s a foolproof crime. More importantly, for Charlie and Oliver, it’s a way out of debt and the key to a new life. All they have to do is take the money.

But when they do, they discover they’ve got a lot more on their hands than the prize. Before they can blink, a friend is dead—and the bank, the Secret Service, and a female private investigator are suddenly closing in. What invisible strings were attached to that account? How are they going to prove they’re innocent? And why is the Secret Service trying to kill them? Trapped in a breakneck race to stay alive, Charlie and Oliver are about to discover a secret that will test their trust and forever change their lives.

This is Brad Meltzer at his most electrifying—a breathtaking, suspenseful story about two brothers chasing a dream that may cost them everything they hold most dear.