Six minutes from now, one of us would be dead. That was our fate. None of us knew it was coming.

“200 years ago, the Freemasons marked the nation’s capital. The question remains: Why?”

“Double-crosses, mayhem, a thrillingly tense stand-off, and a cunning twist only a few will see coming. From the first sentence, Meltzer’s thriller grabs hold and doesn’t let go.” 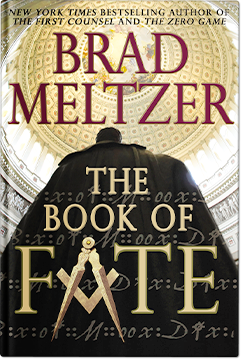 “Six minutes from now, one of us would be dead. That was our fate. None of us knew it was coming.”

So writes Wes, a young Presidential aide, about the day that changed his life forever. It was on that July 4th day that Wes put the President’s oldest friend into the Presidential limousine; by the time the trip came to an end, the friend was dead, the victim of a crazed assassin, and Wes was permanently disfigured by a bullet taken in the face.

“Because of me, Ron Boyle died. Eight years later, he came back to life.”

Trying to figure out what really happened on the worst day of his life will lead Wes on a chase that takes him back to that long-ago July 4th, back to a decade-old presidential crossword puzzle, back to ancient Masonic symbols hidden in the street plan of Washington, DC, and even back to a two-hundred year old secret code invented by Thomas Jefferson. Employing his mastery of Presidential lore and powerful secrets, and expanding to the glittering world of Palm Beach high society and its seedy fringes, Meltzer has crafted his fastest and boldest thriller yet.

The Book of Fate. What does it say about you?