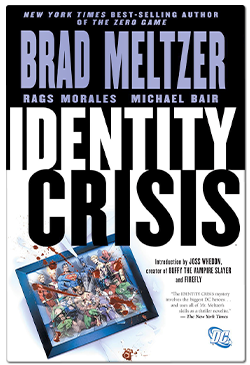 The most talked-about and successful miniseries of 2004 is about to be published in a stunning hardcover volume. New York Times best-selling author Brad Meltzer teams with artists Rags Morales & Michael Bair to deliver an all-too-human look into the lives of super-heroes, and the terrible price they pay for doing good.

Haven’t read comics since you were a kid? Want to see what all the fuss is about? Start here. You don’t need to know anything about superheroes. It’s a self-contained story with everything in one volume.

Bonus features for the hardcover edition include extended commentary by Meltzer, Morales, and the entire creative team. This is the one, people. Read, love, enjoy.

Entertainment Weekly put Brad on their MUST LIST for it. Wizard Magazine named him the Writer of the Year for it. What is it? Brad’s critically acclaimed comic book work—a murder mystery involving Superman, Batman, Wonder Woman, and the rest of the biggest characters in comics.

“If it’s been ages since you read a superhero comic, start with this one.” —New York Post

“The Identity Crisis mystery involves the biggest DC heroes and will use all of Mr. Meltzer’s skills as a thriller novelist.” —The New York Times

“Refreshing…. Underscore[s] that these are very human characters in a very risky business.” —Entertainment Weekly