The Book of Lies

“So much harm comes into this world when the wrong thing is said. But that’s nothing compared to the pain from what goes unsaid.”

“There's the life you live and the life you leave behind. But what you share with someone else - especially someone you love - that's not just how you bury your past. It's how you write your future.”

“Faster than a speeding bullet . . . Readers don’t have much time to focus on anything other than catching their breath . . . The payoff is a doozie, though getting there is half the fun.”

“Part The Da Vinci Code and part North By Northwest and chock-full of plot twists . . . Artfully blends fact and fiction.”

“It’s the Bible meets DC Comics, and not even Dan Brown himself could have imagined that.” 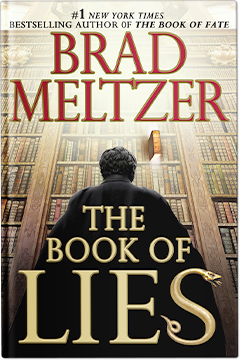 Brad Meltzer—author of the #1 New York Times bestseller The Book of Fate—returns with his most thrilling and emotionally powerful novel to date.

In Chapter Four of the Bible, Cain kills Abel. It is the world’s most famous murder. But the Bible is silent about one key detail: the weapon Cain used to kill his brother. That weapon is still lost to history.

In 1932, Mitchell Siegel was killed by three gunshots to his chest. While mourning, his son dreamed of a bulletproof man and created the world’s greatest hero: Superman. And like Cain’s murder weapon, the gun used in this unsolved murder has never been found.

Today in Fort Lauderdale, Florida, Cal Harper comes face-to-face with his family's greatest secret: his long-lost father, who's been shot with a gun that traces back to Mitchell Siegel's 1932 murder. But before Cal can ask a single question, he and his father are attacked by a ruthless killer tattooed with the ancient markings of Cain. And so begins the chase for the world's first murder weapon.

What does Cain, history's greatest villain, have to do with Superman, the world's greatest hero? And what do two murders, committed thousands of years apart, have in common? This is the mystery at the heart of Brad Meltzer's riveting and utterly intriguing new thriller.